Home » Blog » How Medical Marijuana May Help Veterans with PTSD 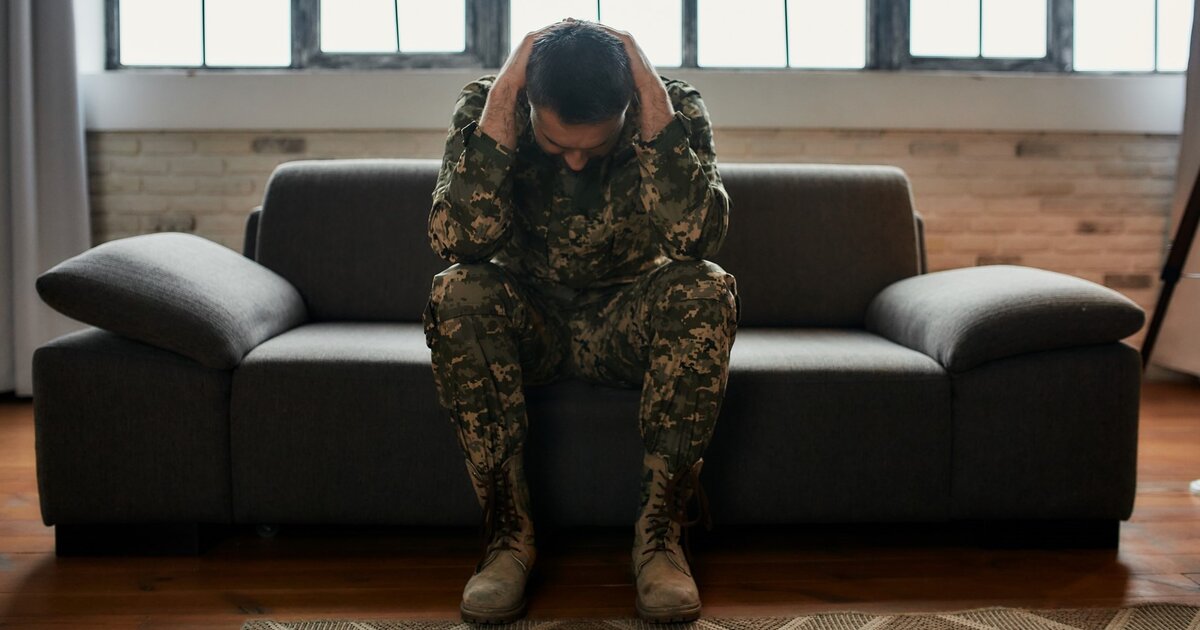 How Medical Marijuana May Help Veterans with PTSD

According to the United States Department of Veterans Affairs (VA), 20 veterans commit suicide each day. Solutions, such as the testing of medical marijuana on veterans experiencing post-traumatic stress disorder (PTSD), are being researched to evaluate potential benefits.

Many veterans with a PTSD diagnosis experience substance abuse issues as well, with a reported 77% of soldiers experiencing other conditions like alcohol dependence. Medical marijuana presents a promising alternative, with many focus groups displaying increased mood and overall sense of well-being.

Medical marijuana is legal in 33 states and the District of Columbia. However, marijuana is still federally classified as a Schedule 1 substance (along with heroin, GHB, LSD, meth, and ecstasy). Schedule 1 substances infer that there is no inherent medical value to a substance, coupled with higher risk of misuse and drug dependency. This prevents the VA from allowing doctors to prescribe veterans any kind of medical marijuana products due to the fact the federal government still views it as an illegal substance.

With more and more studies providing propitious results, the use of medical marijuana or CBD treatments are becoming increasingly sought-after amongst military personnel. Political pressure to reduce the VA’s restrictions from advocacy groups are rallying for the use of medical marijuana as an easier treatment for veterans to help aid in their fight against PTSD and substance use disorders (SUD).

Post-traumatic stress disorder is characterized by flashbacks, nightmares, and anxiety about an event that has transpired in an individual’s life. This disorder can be triggered at any time or at any moment, based on many circumstances reminding the affected of a traumatic event. The body has three main responses to trauma: fight, flight, and freeze.

Many who have developed triggers will experience a response similar to the one they first endured at the origin of their trauma.

The nervous system categorizes a response to trauma in two main ways:

Some of the symptoms veterans with PTSD experience are:

These symptoms can range from mild to severe. So, how is PTSD in veterans treated?

The United States Department of Veterans Affairs (VA) treats PTSD with one of four types of antidepressants:

SNRis increase both serotonin and norepinephrine levels in the brain, while SSRis increase serotonin in the brain. All four of these antidepressants come with a slew of negative side effects, ranging from trouble concentrating, memory problems, seizures, loss of appetite, tremors, and more.

Many have complained of feelings of emotional “‘numbness”’ or inability to operate normally on a day-to-day basis. Could the endocannabinoid system and cannabinoids be the better solution?

Military personnel suffering from PTSD usually display three main symptoms: re-experiencing, numbing and avoidance, and hyperarousal. The Endocannabinoid System presents a unique way of improving the central nervous system’s functions, which in turn improves an individual’s capability of coping and managing their symptoms in a healthy way.

The Endocannabinoid System (ECS) is a complex system that helps maintain homeostasis. Homeostasis is a basic biological process which keeps our physical and chemical conditions regulated. This recent discovery of ECS helps us to understand how medical marijuana aids those suffering from both chronic pain and PTSD. This can improve intracellular communication, immune and pain responses, appetite, and social communication. This association with ECS and the central nervous system affects individuals suffering from both chronic pain and PTSD.

Veterans who use medical marijuana have reported emotional regulation, stress tolerance, reduced anxiety and insomnia, and significant improvements in coping abilities. But what does the research say?

Several pieces of recent research point to the potential of cannabis for PTSD in veterans, though, it’s important to note, sound research is limited due to the current scheduling of cannabis. Currently, cannabis may only be obtained from National Institute of Drug Abuse (NIDA), the only FDA-approved cultivator of cannabis, and of which the potency is significantly lower than what is available in most medical markets. What has been observed, however, is promising.

Researchers at Washington State University utilized data from Strainprint, a self-reporting cannabis journaling app that measures the efficacy of cannabis for symptoms, to analyze the short-term effects of cannabis for PTSD. 404 medical cannabis patients tracked over 11,500 sessions over a period of 31 months. These tracked sessions indicate cannabis eases PTSD symptoms in the short-term, with a reduction of 50% in symptom severity immediately after using cannabis. Researchers did not measure a reduction in long-term PTSD symptom relief, though researchers note more conclusive studies are needed on the subject.

A study published in 2020 and funded by the Colorado Department of Public Health and Environment showed significant improvements in symptoms as well. 150 people self-identifying with PTSD were followed for a year. 75 participants were self-administered cannabis users, while 75 participants were not, with check-ins conducted every three months to measure PTSD symptom severity. Researchers found that symptoms in both groups were reduced in both groups, though note the reduction in cannabis users was more rapid. And, at the 1-year mark, cannabis users were 2.5 times more likely to no longer meet the criteria for a PTSD diagnosis. While this research was conducted in the civilian population and not focused on veterans, the results are still incredibly promising. Chronic pain is a physiological response the nervous system uses to communicate to the body. When an area of the body that has consistently suffered from physical trauma, the nervous system sends an electrical signal to your brain reminding it of its pain. The military requires years of rigorous physical exertion and overtime. This can take a serious toll on the body. Additionally, the trauma of combat increases veterans’ likelihood of PTSD and chronic pain diagnosis by almost 95%.

Statistically, all subgroups of veterans experience varying ranges of PTSD and chronic pain—however, deployed military personnel in both Afghanistan and Iraq had a significant increase in SUD, PTSD, and Ttraumatic bBrain iInjuries (TBI)) diagnoses.

Is CBD Oil Legal for Veterans?

All products containing THC and CBD are prohibited by the United States Department of Veterans Affairs. If military personnel are caught using medical marijuana or CBD in any form, they are at risk of losing their military benefits while in service and have the potential to be immediately discharged.

Veterans who have served, retired, and use CBD and THC products therapeutically, find relief knowing their benefits may not in fact be stripped from them, however, they will not be prescribed by a VA doctor or paid for by their military benefits in a state where marijuana is legal both medically and recreationally.

Efforts such as MORE, the Marijuana Opportunity Reinvestment and Expungement Act, subsequently was brought to the House Judiciary Committee but has yet to be passed. If successfully passed by the court, this would decriminalize and deschedule cannabis altogether, while also providing reinvestment in individuals impacted by the War on Drugs. This could expunge certain cannabis related criminal offenses and end federal marijuana prohibition.

Even so, the strict policy of no CBD or medical marijuana use is predominately handled by the DoD (The United States Department of Defense), which has a zero tolerance policy for any substance misuse. DoD recruits are encouraged to ‘use discretion’ when interviewing new recruits. Individuals with a history of drug use prior to their application are often discouraged in the recruiting process or rejected altogether.

VA Policies On Medical Marijuana From State to State

The federal policy the VA maintains states that, “any illegal substance on the federal level is NOT permitted to be used, recommended, prescribed, or endorsed by the Department of Veterans Affairs, up to and including the recommendation that veterans use pot to alleviate symptoms or pain.” This federal policy even affects states where cannabis is both medically and recreationally legal.

Many individuals who express their symptoms of PTSD or chronic pain would participate in a screening exam for a medical marijuana card, however, the VA does not permit VA doctors to prescribe any MMJ cards. If veterans are looking to receive an MMJ card, they would need to attend a non-VA doctor’s office who is clinically certified to give MMJ cards. Even so, this would not be covered under any military personnel’s medical benefits.

Medical Cannabis As An Alternative To Opioids For Veterans Opioids have been a popular topic of discussion based on the alarming epidemic of opioid dependency and overdose in America. A reported 70,000 people died from opioid overdoses in 2019 alone. This crisis has affected all walks of life, including military personnel. The abuse of these narcotics can cause serious and fatal damage and often leave people with irreversible cognitive damage.

In more serious cases when the substance is abused, opioids can chemically induce comas, cause heart palpitations, hyperalgesia, hormonal dysfunction, and myoclonus. According to the Secretary of Veterans Affairs, military personnel are “twice as likely to die from an opioid overdose than civilian Americans.”

Additionally, due to ongoing chronic pain, veterans have a higher likelihood of developing an opioid addiction. With this information in mind, although opioids may serve a purpose in heavily reducing chronic pain to those suffering, it simultaneously alters your ability to do much of anything at all. It can often leave individuals with an empty feeling—a sense of “loss of self.”

A Need For Change

With alternatives like medical marijuana and full spectrum CBD products, it is disappointing to see many outspoken politicians and advocacy groups have their efforts be continually shot down. The criminalization and schedule 1 state of cannabis greatly contradicts its true properties and medicinal offerings.

Cannabis provides systemic pain relief without the side effects of heavy opioids like fentanyl, which have been known to cause respiratory depression and arrest, unconsciousness, coma, and death.

Having the knowledge that both veterans and current serving military personnel are being prescribed opioids while being more susceptible to opioid abuse and simply wrong.

It is especially discouraging when alternatives like MMJ are demonized for decades, when in actuality, they have been proven to:

An Option for Veterans With PTSD and Pain Veterans experience a great deal of emotional and physical trauma while in service. Medical marijuana can be a valuable treatment to those who wish to remain free from heavier medications like opioids. The studies have shown success time and time again when treating a variety of issues with cannabis, and with time, the research will be far too indisputable to be denied. For pain relief and emotional regulation, medical marijuana can be a wonderful, natural treatment for people.

Do you have your medical marijuana card and are thinking about becoming a patient? Visit our cannabis resources by state to discover how to get your MMJ card in your state.